Chic Meets Grit: How North Park Stands Out From The Rest 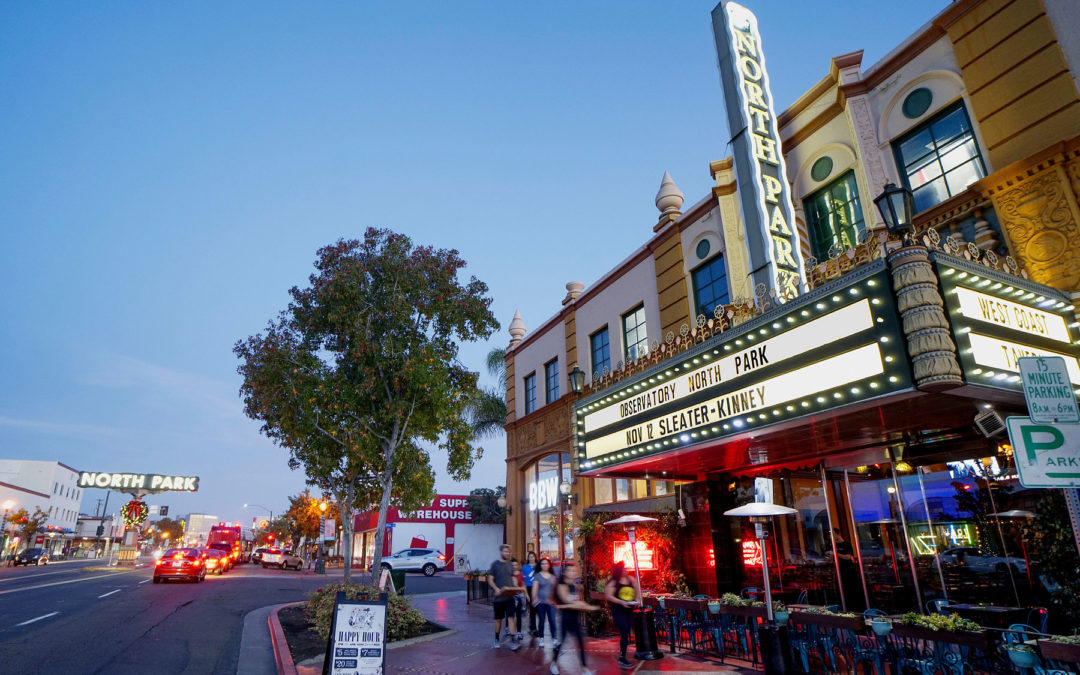 There are more than 100 neighborhoods throughout San Diego, each with their own distinct personality. There’s Ocean Beach, one of the few quintessential, bohemian beach towns left in SoCal; La Jolla, known for being beautiful and bougie; and Coronado, a picturesque resort-town most famous for the historic Hotel Del Coronado. If you head a bit more inland, you’ll stumble upon various lively, urban towns, one of which being North Park, an eclectic neighborhood just north of Balboa Park (hence the name).

North Park’s story began in 1910 when the Hartley family began subdividing the land, once intended for citrus groves, for commercial and residential use. The population, as well as local businesses, began to boom in the 1920s and ’30s. However, after the original trolley system was abolished, the neighborhood began to lose steam. Luckily, though, according to The San Diego Union-Tribune, “pioneering urban dwellers and a parade of restaurants, pubs and breweries helped return North Park to its walkable glory” over the past couple decades.

North Park is most notable for its “hipster happenings.” Named one of the “hippest hipster neighborhoods” by Forbes magazine, the neighborhood offers your essential ‘artsy’ assets like coffee shops, craft beer and galleries, but there is so much more to it than that. A more suitable word for North Park might be multifaceted: the community consists of trendsetters, families, tourists, history-buffs, music-lovers, traditional old-timers, foodies, community activists, party-goers and everyone else in-between.

The neighborhood’s most celebrated quality might be its walkability. According to walkscore.com, North Park is one of the top walkable neighborhoods in San Diego. The pedestrian-friendly streets accompanied by an assortment of unique shops, cafés, restaurants, yoga studios, record stores, art galleries, nail salons and barber shops make for the perfect destination for anything, from a leisurely stroll to an entirely planned day trip or night out.

North Park is home to some of the most unique retail options in San Diego. Check out vintage clothing stores like The Girl Can’t Help It, high-end boutiques like MILA, bookstores like Verbatim Books, flower shops like Sage Sisters, record stores like Red Brontosaurus Records, skate shops like OVERLOAD, pet boutiques like Dexter’s Deli or Home + Hound, and more. Trust us, there is no shortage of shopping in this neighborhood.

For those early birds out there, North Park offers a ton of restaurants that specialize in breakfast and brunch. Flap Your Jacks, a brand-new spot where customers can create their own pancake concoctions, is the perfect place to go if you love trendy, interactive dining experiences. There’s also Lucky’s Golden Phoenix, a beloved local gem known for its quick and affordable breakfast. The former Chinese restaurant now serves full plates for just around $4 until noon.

Also popular: North Park’s range of coffee shops. The neighborhood’s diverse selection of cafés act as a representation of North Park itself. You’ll find trendier, Instagram-worthy spots like Holsem Coffee and Holy Matcha. Guests who prefer their coffee shops a little more straightforward or unassuming may want to check out Dark Horse Coffee Roasters or Subterranean Coffee Boutique. Both spots feature local artwork on the walls, alternative music and a relaxed atmosphere.

As for activities, folks can treat themselves with a massage, manicure, or maybe a new set of lashes at spots like Hello Birdie and Leo-Nails Wellness Massage. Or, help to heal your mind, body and soul at Yoga Box or Barre3 Studio. If you’d rather opt for a more affordable – but just as fun – experience, take a look inside some free local art galleries like VISUAL, Art Produce, and ACD Gallery, or simply walk around to see all of North Park’s amazing murals.

Walk down University Avenue or 30th Street and you’ll be able to find all your favorite types of cuisine. From casual taco shops like City Tacos to more upscale restaurants like the French-American bistro, The Smoking Goat – there’s an option for every taste, craving and occasion. Head into Shank and Bone for some delicious Vietnamese Pho. Keep walking down 30th and you’ll stumble across Cori Trattoria Pastifico, an award-winning authentic Italian restaurant featuring authentic, handmade pasta and other classic Italian dishes. Not feeling either of those? No worries. There are plenty of food options including Thai, Barbeque, Japanese, Mexican, Greek, vegan and vegetarian and more. The list goes on.

After dinner, check out some of the neighborhood’s nightlife. North Park is undoubtedly one of the best spots in San Diego for live music. Of course, there is The Observatory, a historical theater once used to host musicals, symphonies and films throughout the mid-1900s. Now, the theater has been transformed into a “modern-day nightlife destination” and a widely-popular concert venue. Conveniently located in the historic lobby of the theatre is West Coast Tavern, a restaurant with delicious food available before and after shows, as well as a full-service bar that serves drinks until 2am nightly.

The Office Bar and Bluefoot Bar are also popular bars that frequently feature live music on different nights of the week. Each venue has its own, distinctive feel. Grungy dive bars, sports bars, cocktail lounges, arcade bars and karaoke bars – we’ve got it all. North Park has been considered one of the most “hipster” neighborhoods, particularly due to its craft beer scene. It’s true – there are tons of craft breweries here in North Park. There’s Mike Hess Brewing Co., North Park Beer Co. and Original 40 Brewing Company, just to name a few. However, something that is perhaps unique to North Park is you can also find distilleries (like 619 Spirits), cideries (like Bivouac) and hard kombucha bars (like JuneShine) all within a few blocks of one another.

That’s the great thing about this neighborhood: it’s small enough to walk from place-to-place, but large enough to offer endless food, drink and activity options. It feels quaint at times, especially with such a tight-knit community, but also big because of how diverse its population is. Its variety of scenes, tastes, colors are reflective of the amazing people who make up this nuanced, fun, dynamic and quirky neighborhood. It can be gritty sometimes, trendy other times, and everything in-between – no matter what, though, it always remains authentic.

Thank you @BikeSD and everyone who came out to 30t

Happy Fourth of July from your friends at North Pa

In a recent @Thrillist article "Everywhere You Nee

Come celebrate the 4th at @RouleurBrewing ! On Mon

Thirsty Thursday! Head to Cori for this refreshing